Friend, let us fearlessly, but with devotion step into nature and great will be our pure, high pleasure 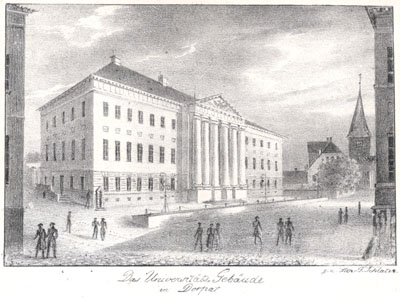 The university’s main building in the first half of the 19th century. It was nearing completion when Grindel arrived.

Grindel’s grandfather was a serf who fled a manor to Riga, found work in the city and became one of the first Latvians to become a citizen of Riga. Grindel studied in Jena, took his pharmacist’s examination in St. Petersburg and bought a pharmacy. In 1804, he sold the business and became a professor of chemistry and pharmacy at the University of Tartu. In 1810-1812, Grindel served as the rector. From 1814 to 1820, Grindel again worked as pharmacist and then decided to become a doctor. He returned to the University of Tartu, this time as a university student. The pharmaceutical firm Grindex was named after him.